can have harmful effects on the people they are spewed at or about.

With labels, we segregate ourselves into special groups – sub-groups of humanity. (NOTE: That is not always bad. Segregating into groups of like people can help us find our tribe, but far too often, we use them in a negative way.)

Labeling begins the day we are born. My son and daughter-in-law brought twin grandsons into this world in December 2020. Born at 29 weeks and each weighing around 2 pounds, they were considered micro-premies. (A term I had never heard before. And yes, both boys are doing well.)

As we progress into the world, more and more labels are heaped upon us by society and education. We are gifted or learning disabled. We are too calm or hyperactive. We are a picky eater or a “Mommy’s boy” or a crybaby.

By the time we move into the upper-elementary grades, our labels begin to become unbearable, and they come from our friends as well as peers we don’t really know.

Labeling Beyond Society and Education

By high school, our peers are handing out labels as well. And, then, we have become part of the groups that wear the labels that we do.

When my sons entered the middle school years, I worried about how they were going to fit in and what label groups they would gravitate toward. I had tried to keep each one as unique as possible and foster whatever they were interested in.

In a dinner discussion one evening when my youngest son was a freshman, he referred to himself as a “nomander.”

“Wait. What is a nomander?” I had to ask because, as a high school teacher, I had never heard the term. I needed a definition to keep up with the conversation.

He and his small circle of friends had created their own “group” — the “nomanders.” They didn’t fit into just one group since they enjoyed school, played in band, participated in sports, and played both video games and role-playing games. As “nomanders” they existed in “no-man’s-land” where they could be friends with anyone from any group without belonging to those groups.

I wish everyone could be as self-confident as he and his friends were.

Sometimes our excuses come from the labels we have been given

Take for example the student with a 504 plan (think: a plan developed by a counselor and a special education advisor to help you succeed in school) that didn’t hold him accountable for anything, not even remembering to bring his book to class. He was to have a book available in the classroom, in his locker, in the tutorial room, and one at home. To me, the staff and parents enabled the student’s difficulty to keep his attention focused and his label didn’t allow for his growth and development.

Think about the struggle of some to overcome their weight problems. If you received the label of being over or underweight instead of evaluating your eating habits, activity level, or even emotional state; you may find yourself using the excuse that since you have always been overweight you will never be able to achieve a healthy weight.

It’s time to stop using labels as excuses or crutches.

I’m guilty of this as well. I use my perfectionism and mild obsessive-compulsive disorder to allow me to wallow in procrastination. I use the label of “retired” (I retired from teaching in 2014.) to sit and do absolutely nothing some days.

The Negative Aspect of Labels

With labels, come degrees of influence and hurtful twists: Come with me on a brief experiment — an experiment I used when teaching a course in oral communications (or more commonly called public speaking).

Discussion topic for the day: the positive and negative power of words.

As class settled, I drew a stick figure of a girl on the chalkboard. “This is Sally.” (Yes, I was the strange teacher who named my stick figures.) “Sally stands about 5’9” but weighs only 105 pounds. I’d like you to call out some words that describe Sally.”

As the class called out words, I wrote them down. Included in the list were the words “skinny,” “anorexic,” “under-weight,” “thin,” and “model-like.”

Then I asked my ladies what would be the worst thing to be labeled that appeared on the board. Most of the time, the response was “anorexic.” When asked why, the consensus was the same: the word “anorexic” implies that you have a disorder or an illness.

(One year the term “emaciated” also found its way onto the chalkboard, and the inference was that you had come from an under-developed foreign country. As one student called out, “You know, like you see in some of them old National Geographic magazines.”)

Then I asked the ladies what would be the best adjective on the board. Again, most of my ladies agreed that “thin” would be the most flattering. “I wouldn’t want to be called ‘model-like,’” said one girl, “because that implies that I’m stuck on myself as well.” (Point noted.)

How about giving yourself the label of Prolific Writer, Awesome Parent, or Hard-working Employee and then living up to the title you give yourself?

This article was first published in “Writers’ Blokke” through Medium on January 24, 2021. You can view it HERE.

Are You on Track to Accomplish Your Goals? Try Reflecting and Revising to See More Success.

It's Your Choice Today: Will You Dance? 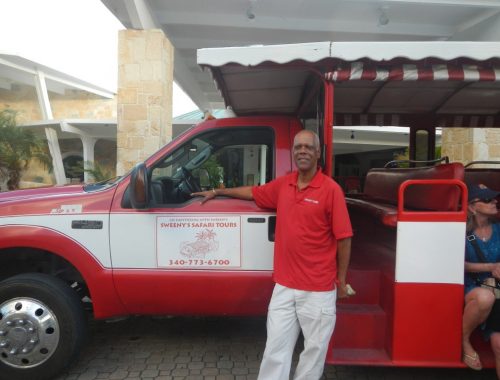 Sweeney Tours in St. Croix (A Must)

Why I Care About the Stuff in the Garage