Depending on how you use the term, “old” can refer to the number of years you have been alive (I am 61 years old), but “old” also generates the meaning that a person is “advanced in years;” and therefore, indicating who the person is, how the person should behave, and what a person should wear and do.

AGE DOES NOT DEFINE YOU!!!

How old is old?

To a child of 5, a person of 30 is “old;” but to a teenager, a person of 40 might be “old.” If we refer to groceries, “old” is past the expiration date or the “best by” date. The strawberries are “old” if they are overly mushy or moldy. The milk is “old” when it is lumpy or begins to smell sour. In qualifying an item as an antique, it must exceed 100 years. (Oddly enough, when I was growing up, I think the number was 20 years or more.) If you want to categorize an item as vintage, it must be better than 20 years old. BUT, those definitions have nothing to do with a living, breathing human being.

Unfortunately, many people have gotten caught up in the idea that looks (referring to age) are everything and that looks define your age.

I laugh at that.

One of my responsibilities as a high school teacher was to teach the theater classes and direct the high school plays. One year, when I took a group of my theater students to the Illinois State Theater Festival, several students enrolled in a stage make-up workshop. One student, sixteen years old, was made up with wrinkles and bags under her eyes. To add to the effect, they put her in a dress like my grandmother wore in the 1960’s and gave the girl a cane. They also taught her how to walk “old.” If you had passed her walking down the street, you would have sworn she was 70 years old.

In a recent CoverGirl and Olay commercial, the model Maye Musk (age 70) makes the statement that “people say at a certain age you just stop caring” and then she wonders when that will be for her. She looks fabulous in the commercial, but doesn’t look like she is fighting age with plastic surgery like some people do.

Check out the commercial.

How do you fight age?

Too many people get caught up in the idea that how old they look conveys how old they are; that in order to look younger they MUST change the way their body is aging. They buy into the television infomercials telling how this product or that product will eliminate the bags under your eyes, take away your wrinkles, eliminate your gray hair, or various other ways a product can make you look younger. They buy into plastic surgery or Botox to make them look younger or better.

How are you fighting against the years?

The Age Question: How old are you?

My mother went back to teaching in the mid 1960’s. For most of her career, she taught early elementary students. When her kids asked her age, she turned the question back to them: “How old do you think I am?”

The responses were priceless: many thought she was past the age of 75, and one child told her she was more than 100. (She was actually between 35 and 50.)

Early on in my teaching career, I literally had to think about the year I was born and count to figure out my age. (Except for turning 16, 18, and 21; I have never really thought about my age.)

Other responses I’ve encountered when people are asked their age:

“Old” vs Issues Related to Aging

Over the years, screen writers and commercial writers have addressed the issues that we face as we age: health and medical, financial, relationships, and even death; but none have been able to clearly define “old.”

Have you watched Cool Kids yet. It’s a show on FOX about a retirement center and some of the more active, yet rebellious people living there.

My mother would have fit in very well. At age 75, she believed that she had lived long enough to speak her peace and was still young enough to travel the world, in some cases by herself. People rarely thought she was as old as she was.

Even Golden Girls, a TV series lasting from 1985 to 1992, dealt with issues of growing older: living on social security benefits or a pension, looking for companionship after your spouse passes away, health and medical developments, and even the occasional look at death.

To me, for the most part, age has always been just a number. The ideal number? I’m not sure. Look at Betty White, born in 1922, who can claim the longest career in television (80 years) for a female. At 96 years old, appeared on the 70th presentation of the Emmys to accept an award for her career.

At the time of writing this article, I am 61 years young. I don’t feel old today. If I had to put a number to it, I would have to say I feel about 35. I feel energetic enough to tackle the things that need to done and agile enough to get through them.

Yes, I have those days when I don’t feel like doing anything but parking my butt in the recliner and watching television, but I’ve had days like that since I was in junior high school. Unmotivated? Yes. Depressed? Maybe. Old? NEVER!

To me the primary aspect of OLD is when you lose the passion for living life – when you just accept being alive.

My ex-husband’s mother (Sis) was like that for years before he and I divorced. She and my mother were basically the same age, but my mother was always on the go. Sis, on the other hand, rarely left the house. She’d cook and clean, but the rest of the time she spent watching television (especially her soap operas) or watching the world go by out the picture window in the living room. Early on when I first met her, she knit or crocheted blankets, bonnets, and booties friends and relatives who were expecting; played cards once a month; and even worked for the election board at the polls. After her mother passed away, Sis’s world seemed to start shrinking. She no longer had the passion for life and seemed content to let life go on without her. When her husband passed away, she rarely left the second floor of her home.

A Better Way to Look At Age

When I met Doug, a teacher friend of mine, the question of age came up at the faculty lounge lunch table.

“In a week, I’m beginning my 57th trip around the sun,” he declared one day. I found it an interesting philosophy, that he wasn’t counting his years on Earth, but celebrating the completion of another trip around the sun and beginning another journey along that same path…

I’ve adopted his philosophy. I didn’t dread my 40th, 45th, 50th, or even 60th birthdays. I started looking at what I had accomplished during that trip around the sun and began looking ahead at what I want to accomplish this trip around.

If age isn’t a number, what is it?

Is old when you have a chronic illness or disease? Nope, that can’t define old because then children would never be diagnosed with cancer.

Is old when you are too scared to venture out of your home? Nope, because there are people in their 20s diagnosed with agoraphobia, the fear of the world. (This goes for people with PTSD as well.)

HOW TO FEEL OLD!

BUT HOW TO SWITCH YOUR MINDSET TO FEEL YOUNGER!

Attend your class reunion or only associate with people your age.

THE SWITCH: Continue to meet and become friends with people in ALL age brackets.

There is a lot to be said for having friends in all age brackets. At 80, my mother would visit the church’s shut-ins (many were near her age), but she also got involved in activities that attracted people younger than she. I could swear that teaching first and second grades kept her young-at-heart. Teaching high school students kept me feeling young.

Talk about all your health ailments or as they did in the past, dwell on your “rheumatism.”

THE SWITCH: Leave the health discussion for your doctor(s), your spouse or significant other, or your health care coordinator.

Anyone at any age can develop health issues, but those that are doing the best don’t constantly talk about them. (But, yes, there is a time to talk with your friends and loved ones about your health issues. Just don’t dwell on them.) Branch out into topics that interest others. Join a class or a workshop. Learn a new skill or craft — perfect one you are already acquainted with.

Leave the hair gray and dress old and work to fit in with all the rest of the “old” folks.

THE SWITCH: Dye the hair and keep your wardrobe young.

Dying my gray hair (if you can call the un-dyed version gray) is the onlyalteration I ascribe to. Actually, I’ve been dying my hair for the last 15 years or so. It gives some body to the baby fine thin hair I’ve always had. I’m not planning on getting the laugh lines on my face removed or trying to mask them with make-up. That just makes me feel like a fake.

On one episode of Last Man Standing, the daughters were aghast when their mother planned to wear a dress that should only be worn by someone years younger than their mother.

If you like the outfit AND it looks good on you, your age should not dictate whether you buy that shirt, pair of pants/jeans, dress, or skirt.

Stop exploring the world and say “That’s only for young people.”

THE SWITCH: If something or someplace or some activity interests you and you are able to try it, DO.

Last summer, we joined a park district recreation facility that had an outdoor pool with a couple of water slides. Most of the people using the water slides were under the age of 21. That is until my husband and I joined the crowd. Both of us went down the water slides and had a great time.

Allowing people to tell you that you can’t do something.

THE SWITCH: You still have a mind of your own. Use it. Listen to people’s arguments about why something isn’t a good idea (usually it is from jealousy) and be ready to defend your decision.

In her 80s, my mother drove from Northern Illinois to Western Canada by herself to visit some friends she had met on a cruise. Well, maybe not all by herself: she did have OnStar in her car, her cell phone, and a plastic lizard she called Lizzy on her dashboard. She also laid a baseball bat and two ball caps in the back window.

At age 83, she joined a tour group to the Galapagos Islands and climbed in and out of a “panga” boat.

Remember, age is only a number and a number can’t define you. Allow yourself to live life with all the passion you can.

Stand and Be a Survivor 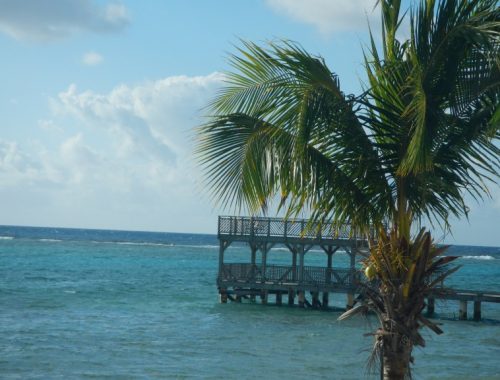 The Call of the Caribbean 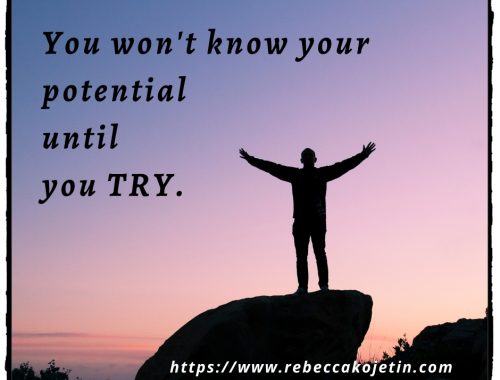 Your Best IS Yet To Be! 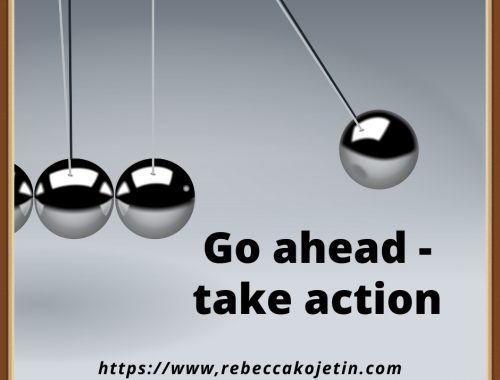 How Your Actions Today Can Equal Your Success Tomorrow