How I Keep My Act Together

Don’t get me wrong. The Bullet Journal is a concept and has some great ideas that go with it. But even if the concept had been around in the 1980s and 1990s, I didn’t have time for all the drawing and “creating” that seems to go along with it.

I had what I called my “One Notebook” and a large calendar.

With a different colored highlighter for each family member, I drew lines on the calendar. In the beginning, I had a color as well.

That didn’t last long since my schedule was more complicated that my children’s or my husband’s schedule, and I, alone, was the juggler.

What did I juggle?

As a teacher, I juggled teaching anywhere from two to five different courses, faculty meetings, department meetings, professional development workshops and classes, directing high school theater productions, and working on the next educational degree level. Add to that church, family gatherings, and other meetings.

So, I decided that I could better organize things if I had the white space and used colored pens to quickly tell me what category the task or event fell into: one color for work, one for extra-curricular, one for church, one for family, and one for appointments and meetings that didn’t fall under any of those categories.

For a while, I tried to keep a separate notebook for everything. At work, I tried to match the color of the cover of the notebook with the color of the cover of the textbook. Then, there was one for work related meetings and one for classes I was taking. It got to be too much when I had more than five different notebooks to keep track of. It never failed that I grabbed the wrong one or forgot one.

Something had to give.

That’s when I decided to try using only ONE notebook to record everything in.

Each evening before calling it a night, I dated a clean page in “My One Notebook” for the next day. Then I transferred the specific things from the calendar chronologically. As the day went, I entered notes from meetings at works, notes for my classes, and everything in between. Of course, the size notebook I use now would have been too small. I used a regular (8 ½ X 11) spiral notebook. I never wondered if I had the correct notebook, and I color coded the important pages (Notes for faculty/department meetings and notes for classes were the most important.).

With my adult children raising families of their own and with only two of us in the house, I no longer need to massively color code my calendar.

The master calendar hangs on the wall on the wall beside the refrigerator on the way to the bedroom. Everything goes on this calendar.

Everything also gets recorded in a smaller spiral bound calendar in my purse. This became essential when my husband became a trucker and proved even more important when we moved to Tennessee and found ourselves with numerous doctors.

When my husband called each evening, I recorded his location on the calendar. Why? Two reasons. First, my husband is a diabetic. If I didn’t hear from him in the morning and couldn’t get ahold of him, I knew his whereabouts and could call for help. (I am very, very grateful that this never became necessary.) It also allowed me to know where he was with weather storms.

When we had doctor appointments in Northern Illinois, most of the doctors would tell us when they wanted us to schedule our next appointment. BUT, I am finding with the doctors in Tennessee, the doctors tell us when they want to see us next and put it in the computer; then, when we check out, they are ready to schedule our next appointment. At first, they were giving us a little reminder card. It was never a surprise that I would misplace it somewhere. So now, instead of the reminder card, I put the next date into my calendar immediately. It has also helped us from scheduling overlapping appointments and having to reschedule.

MY ONE NOTEBOOK TODAY   (now influenced by The Bullet Journal concept)

I still use “My One Notebook” and people have laughed at it. I don’t care. It works for me.

It has morphed a little since I retired from teaching and have taking up a career in writing. Most of those morphs have been influenced from reading about Bullet Journals.

The BEST idea I have utilized is the idea of numbering each page and creating an index.

I have, however, taken that a bit further.

Each notebook is given a volume number. The index then has a comprehensive list so if I want to find my notes on a monthly writers meeting or blogging ideas or orchestra rehearsal notes, I can look at one index page rather than the index page in each notebook. These index lists are on loose leaf notebook paper and alphabetized in a three-ring notebook. This has saved me a great deal of time.

PIECES OF THE BULLET JOURNAL CONCEPT I FIND USEFUL

#1 – A page at the beginning of each month where I record the birthdays I need to remember and the dates. When I send out the birthday card, I can then check the name off. No need to wonder if I sent the card.

#2 – A page at the end of the notebook to record the titles of books I want to read and movies I want to see.

#3 – A page at the end of the notebook to record items for my bucket list.

How to you organize your life? What do you find difficult about getting organized?

5 Foods That Are Better Cooked Over a Campfire 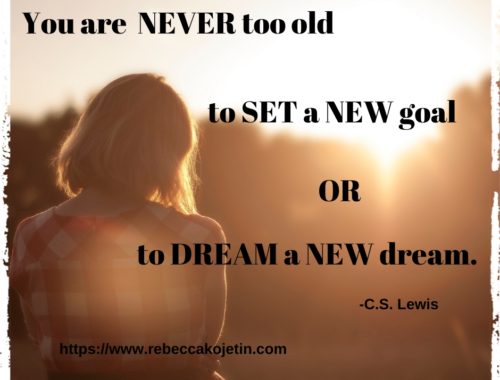 Let Your Dreams Motivate You